You are here:HOME»CORPORATE FILM
Thursday, 04 November 2021

Corporate film for a Berlin-based surveying and software company

When the surveying service provider ARC-Greenlab approached us with the wish to have an corporate film produced, we had no idea how extensive the company's portfolio was and how many exciting areas of work it included. But it quickly became clear that there are the surveyors in the "field", i.e. those who use total stations, laser scanners and drones to record survey data and measure buildings, roads, building land, farmland and forests. They make this data available to the software developers, data engineers, CAD, GIS and BIM specialists in the office. They evaluate the data, process it further and create 3D models, plans and maps for the customers. The different fields of work are closely interlinked.

We were commissioned to produce a three-minute corporate film, which ARC-Greenlab wanted to present on a digital trade fair to show the extensive range of services they offer. For this, our camera team filmed one day in the offices at the company headquarters in Berlin-Treptow and another on a current construction site. We also went to other surveying sites because we wanted to see the different surveying tools in use.

The client decided to work with actors and actresses instead of the company's employees to portray the various activities. This meant that we had to explain to our actors in detail all the fields of activity on the highly complex surveying equipment and the operation of the in-house software. We were supported by a very committed team of ARC-Greenlab employees, who were also very patient (we had a lot of questions). And not only the actors and actresses, but also the director and the cameraman needed appropriate instruction in the work processes, because at the end we had to judge whether the actions on the construction site and the operation of the technical equipment were carried out correctly. For both sides, these were two very eventful and learning-intensive days on the subject of surveying.

The clients come from the construction industry, telecommunication companies, traffic and transport and from federal, state and local authorities

On the second day of filming, our camera team filmed on a real construction site, the extension of the A100 in Berlin-Neukoelln. Here the laser scanner and the total station were used and the surveying specialists from ARC-Greenlab accompanied our filming. The actors and actresses learned how to operate the technical equipment, but also how large a survey mark should be.

ARC-Greenlab offers two software solutions which their engineers developed. One, gl-survey, is mainly used by users from engineering, cadastral and railway surveying. To show this software in the film, we used the processed digital survey data that was created on the A100 construction site. The second proprietary software is called gl-forest. This is used in forestry, hunting and environmental management. To illustrate the possible uses of this software platform, we filmed in the Königsheide in Berlin. Very impressive pictures were taken here, as we used our drone to observe ARC-Greenlab's surveying drone collecting survey data.

All shooting for the corporate film with the new Sony FX6

Shortly before, after an unusually long waiting period, the new Sony FX6 had finally arrived at our office. So we decided to shoot the entire project with the new camera and put it through its paces. We used the two new Sony fixed focal lengths SEL FE 50mm/f2.5 G and the SEL FE 24mm/f2.8 G as lenses. We were also supported by the PZ 28-135 mm F4 G OSS from Sony, which we use for some time, but which scored really well here on the FX6 full-frame camcorder.

Thanks to the FX6's variable ND filter, we were able to make good use of the advantages of a shallow depth of field with fast fixed focal lengths, even though the sharpness increased considerably as soon as the aperture was stopped down a little. I found the face and eye autofocus to be quickly irritated and to leave the face and eyes briefly every now and then. Fortunately, there were no interviews in this film where we would have relied on the automatic focus tracking of an unmanned second or third camera. But perhaps there are still some things to learn and observe in the settings of the focus menu in the camera, for which there is time now, after our shooting. 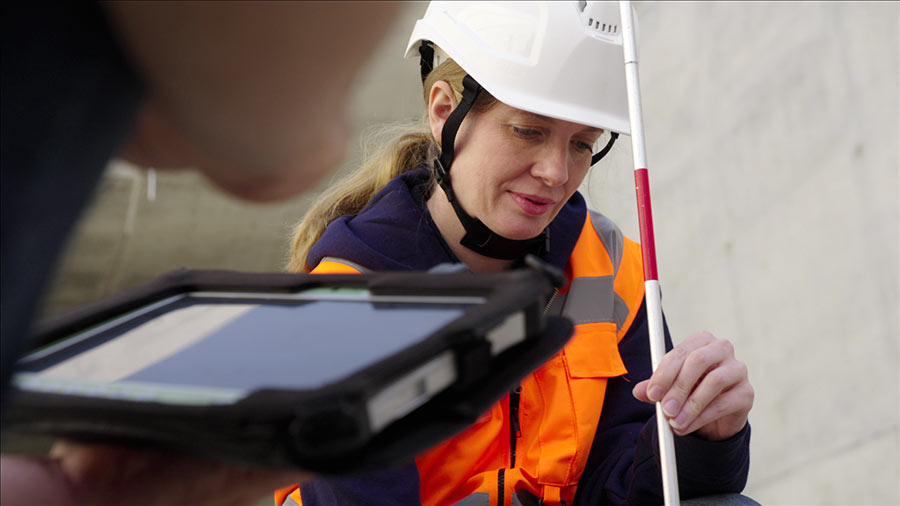 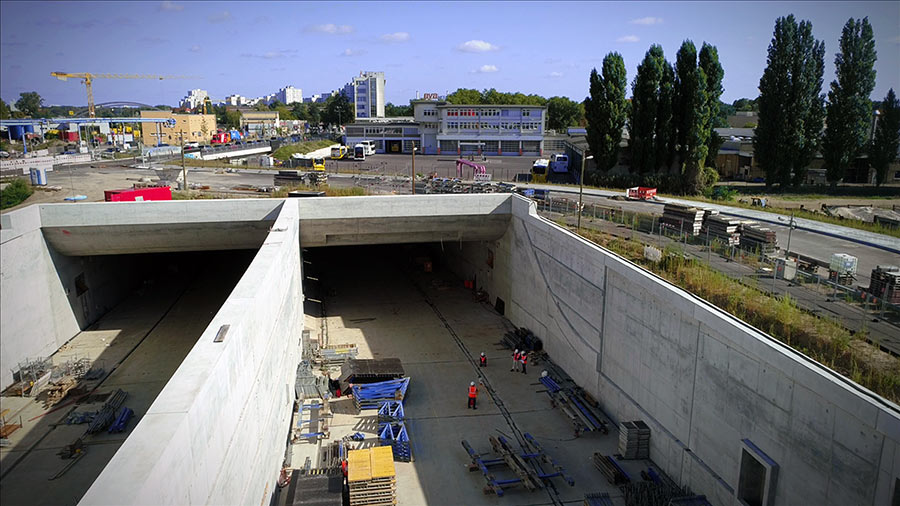 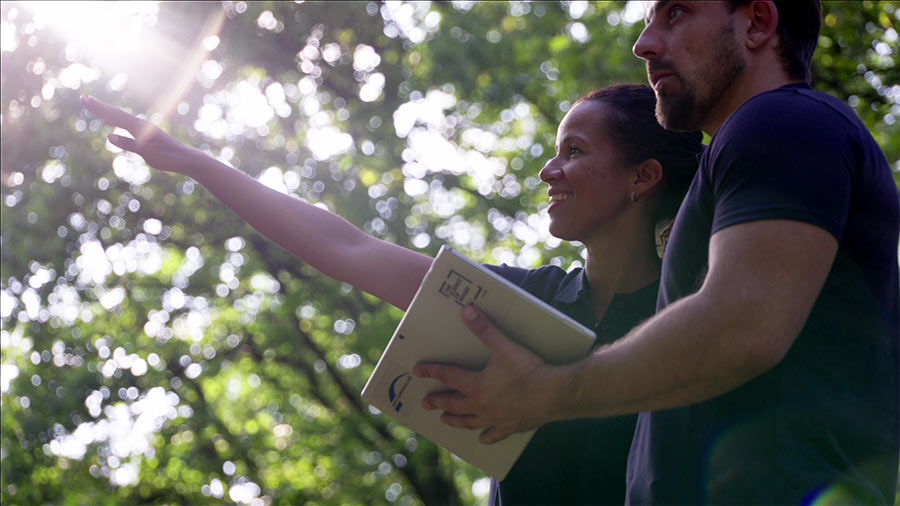 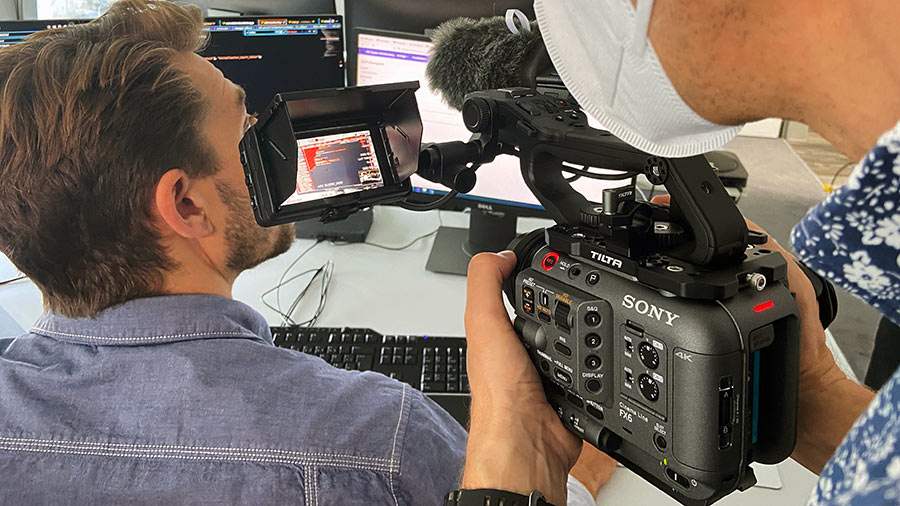 Corporate film about the manufacturing process of medical technology

aap Implantate AG is an internationally active company based in Berlin that deals with the development and production of medical devices, especially in the field of traumatology. Here at the Berlin site, anatomical plating systems and a variety of different cannulated screws with the highest quality requirements are manufactured.

Implants for German and international healthcare

aap's products are sold internationally and made directly available to the healthcare sector in Germany. aap Implantate AG regularly offered guided tours in the production facilities in Berlin Tempelhof to interested customers. But since the COVID19 pandemic, this has not been possible. The medical technology company asked us to produce a corporate film. It is intended to be used to tour the workshops of aap virtually and on the screen.

For the shooting of the corporate film, our camera team spent a day in the various departments of the production site and documented the production of the plating systems and the cannulated screws. The process of creating the plating systems is particularly impressive. The starting material is a meter-long titanium rod, which is cut to length in the first step and from which the perforated plates are then extracted. Further steps are concerned with the optimal quality improvement through polishing, measuring, cleaning and disinfection. At the end of the process is the sterile packaging of medical devices. 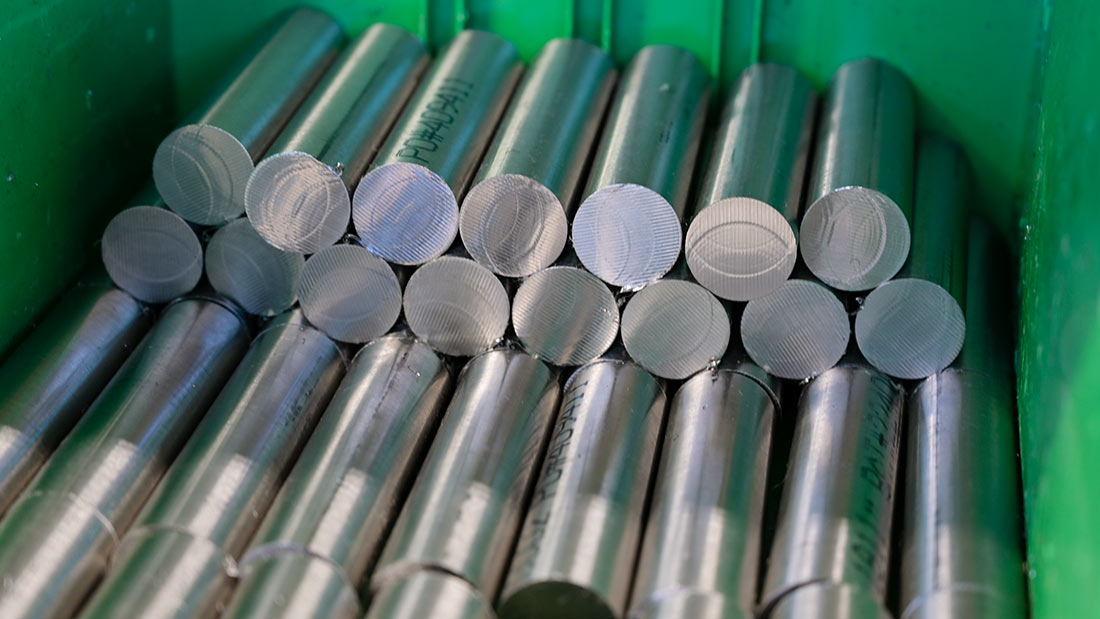 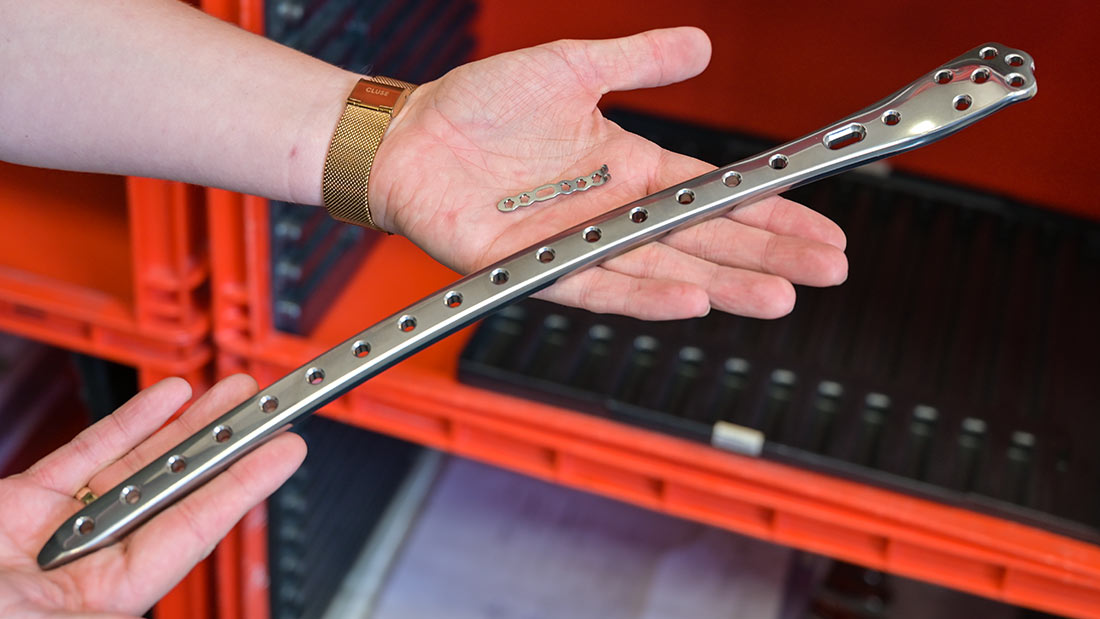 The result: the smallest and the largest perforated plate for traumatology

Instead of an off-text, spoken by a professional speaker, the customer decided to have animated panels. They describe the complex production processes as well as the machines and materials used. These panels, whose place in the finished film had not yet been determined, always had to be considered in the carding of the film shots and were a small challenge for our cameraman in some production departments. 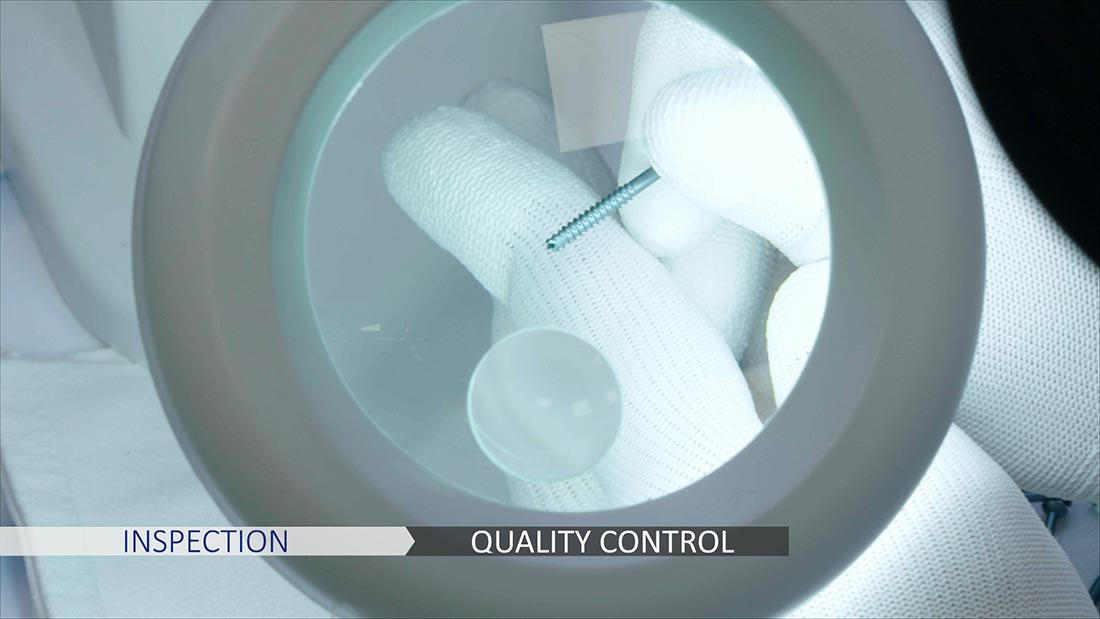 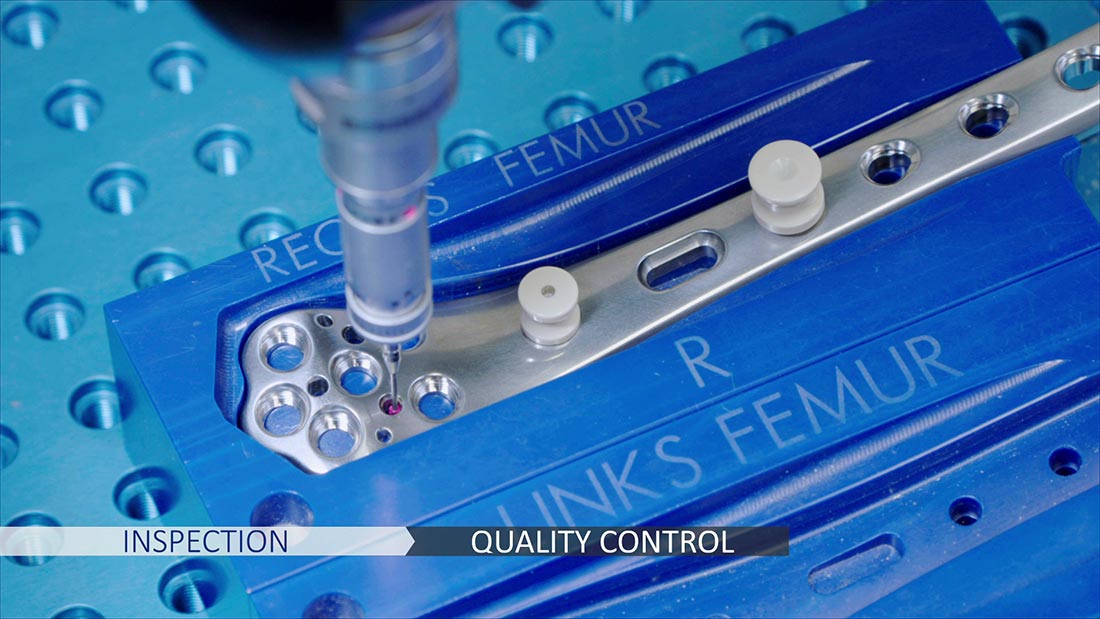 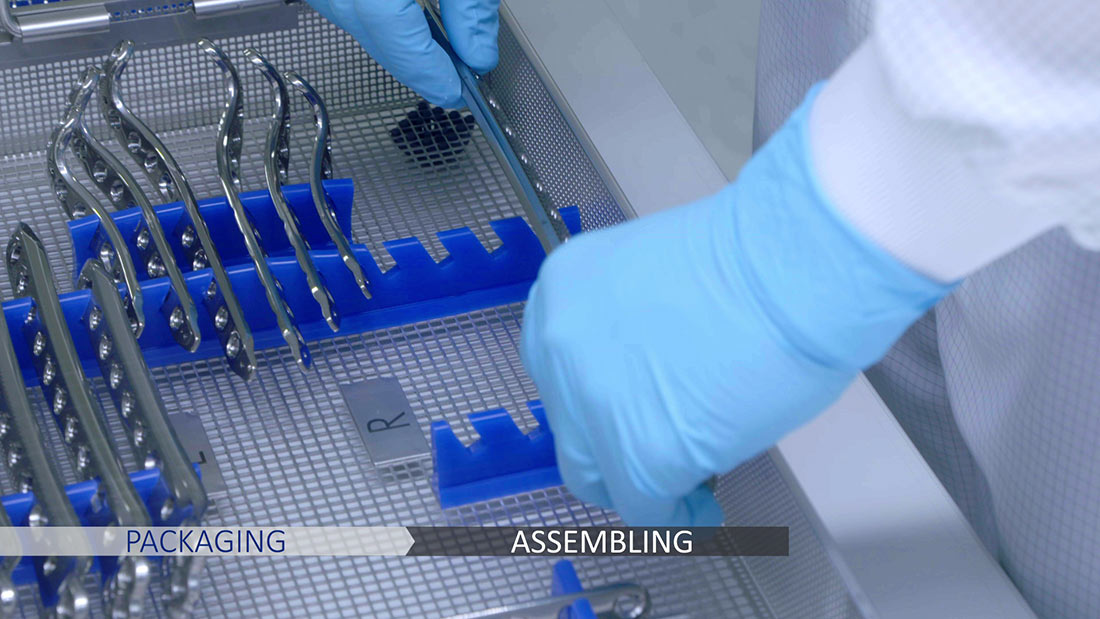 Although the implants are made of titanium, they are incredibly fine and soft, their weight is extremely low. This is an important topic for aap and so we decided to make this extraordinary quality visible. In our studio we therefore stage a selection of different products of the aap Implantate AG. Here our Nikon Z6 with a macro lens and an external Atoms Ninja V recorder was used, which is small and flexible. So we were able to realize very unusual settings.

With these shots we start the film. Thus, it is possible for the spectators to see right at the beginning which products are produced during the tour through the production halls. Because in the corporate film it takes some time before the finished product is seen. Also at the end of the video, products from aap are shown. Here it is mainly tools manufactured by aap that serve the optimal insertion of the implants into the body of the patients inside.

Rheumatism is a disease that has many faces. There are more than a hundred different clinical pictures. Often it is difficult to identify them clearly, but it is so important that a diagnosis is made quickly. Only then rheumatologists can start a personalized treatment. Biological medicines, so-called biopharmaceutical, play an important role in the therapy. They can delay the course of the disease and, above all, relieve pain.

Filming with a patient and rheumatologist in Berlin

For the working group Pro Biosimilars our film production produced a corporate film about the this subject in August and September. How do biosimilars, the replicas of biopharmaceutical, influence rheumatic diseases? We met a patient in Berlin who has been ill for more than twenty years. She told us impressively how the biosimilars changed her life. We also talked to her rheumatologist who has been prescribing biopharmaceutical and biosimilars for many years.

Corporate film: The FabHaus from Australia made in Poland

Who does not dream of it? A modular house that will be built in a few weeks, sustainable, energy efficient and environmentally friendly? The German-Australian architect Julia Thomas designed such a house. She calls it FabHaus, the fabulous house. For a long time she has been busy with the design plans, because she wanted her product to be a passive house that matches all the characteristics of green architecture.

In Australia, it is currently too expensive to commission such a modular building. Moreover, the Australian craftsmen and engineers are far from having the expertise that distinguishes European home builders, Julia Thomas tells us during our film shooting. Through research and good contacts, the architect discovered a production facility in Poland that theoretically suits her expectations.

Cinematic documentation about the development process

But of course she wanted to experience it practically and travelled to Poland to visit the company. She invited us to accompany her on her first visit in order to document the development process of a FabHaus cinematically. Two days we spent in Kwilcz, filmed the negotiation talks between architect and manufacturer and could win a good impression. In any case, Julia Thomas is enthusiastic and soon it is clear that she wants to have her product made here. The idea: The complete house is fabricated in Europe and shipped to Australia. Within about two days then it is assembled by Our FabBuilder, ready for the clients to move in. From order to completion,Julia Thomas allows six months as a general guide. We are impressed too. Now we just want to see how the first modular building of Julia Thomas is set up in Australia. We are planning this trip for 2020 and are already looking forward to seeing how Our FabHaus will continue.

Again and again, even in the case of essential medicines such as antibiotics, there are bottlenecks. What impact do they have on supply? Would it be possible to produce more antibiotics in Germany in future times in order to make supplies more secure? The film, which we produced for the association "Pro Generika e. V." tries to find answers.